Soccer Moms And Their Secret Addictions 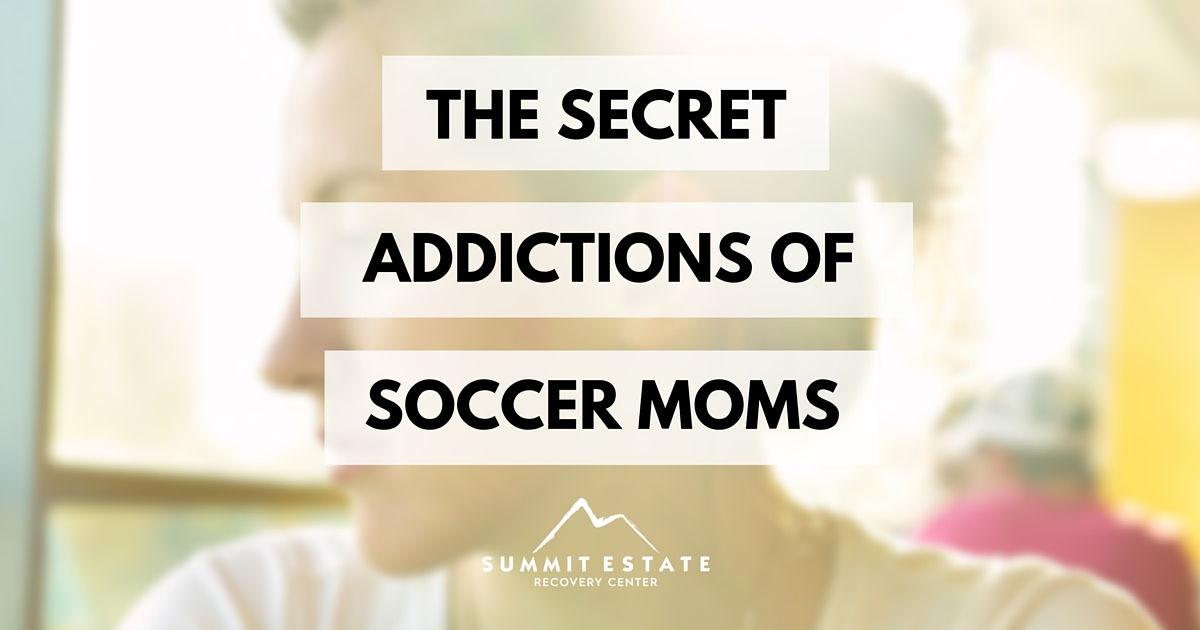 The popular term “soccer mom” brings to mind a certain type of individual – a devoted suburban mother who spends a significant amount of time driving her children around town from one sporting event to another in her late model minivan or SUV. Soccer moms are polite, volunteer at school, believe in fair play, put their kids’ lives ahead of their own and rarely say the wrong thing. The term was popularized during the 1996 presidential election when at the time, political strategists believed soccer moms were mostly undecided swing voters who would influence the outcome of the election. This propelled them to tailor their message to a segment of voters who had never existed before. And, that’s how the parable of the soccer mom was born.

Perfection Comes At A Price

The truth is, the proverbial soccer mom is often an overburdened, stressed out working mother who is burning the candle at both ends. With single income households largely a thing of the past, many moms find themselves pulling double duty, working full time jobs while performing a full daily schedule of motherly duties. It’s not easy living the perfect life, maintaining a spotless household and being the ideal mom. No matter what anyone says, the majority of kids rely on their moms first and foremost. It’s an exhausting, never-ending, emotionally satisfying but draining job. For some soccer moms, perfection comes at a heavy cost. Relief from unrelenting stress can be found in a glass of wine or a bottle of prescription pills.

The most common mood-altering substances of choice are pain pills, stimulants and alcohol.

Each has its own particular reason for becoming a go-to drug. You won’t find too many soccer moms writing “score drugs/become an addict” on their daily “to-do” list. Unfortunately, many well-meaning moms casually descend into addiction without ever intending to, and sadly, many times without realizing what they’ve done until it’s too late. In 1966, Mick Jagger and the Rolling Stones wrote a hit song with “Mother’s Little Helper.” The lyrics describe a spread-thin mom who requires a pick me up to get her through her day. Fifty years later, the story hasn’t changed much.

Here’s two prototypical moms and their stories of how they became addicted.

Carol is a programmer with a high paying job, two kids in grade school, a husband who works 55-60 hours a week at a law firm and a jam-packed schedule that keeps her on the go from six in the morning until eleven at night. Just when she thought she couldn’t possibly handle one more thing, her mother broke her hip in a car accident which required Carol to drive over to her mother’s house each night to check on her. It seemed that everywhere she turned, someone was demanding something of her. She wasn’t able to keep up the pace. Her level of exhaustion was making it hard for her to concentrate at work.

One day, on a routine visit for physical therapy for her mother, Carol asked the doctor if he could prescribe something for her exhaustion.

Rather than face the truth about her ridiculously overscheduled life and make the hard choices required, Carol opted to not rock the boat and maintain her supermom “A” rating. The doctor was only too happy to help and started her off with a Silicon Valley favorite, Adderall. The drug gave her a lift, made it easier for her to concentrate and it also seemed to lighten her mood considerably. Unfortunately, Carol discovered she could purchase Adderall on the Internet and save herself a trip to the doctor’s office. It wasn’t long before her Adderall experiment turned into Adderall dependence.

Lisa is a soccer mom who loves her kids and enjoys playing tennis and jogging. Her husband makes a good living running a successful family insurance agency started by his father. Lisa works part-time at the office about 10 hours per week. This allows her plenty of time in the afternoons for the kid’s activities and her own fitness pursuits. One thing about Lisa is she never does anything half way. When it comes to fitness, she pushes herself hard. She’s the top women’s tennis player at her club and she religiously jogs 15 miles a week to stay in shape. One afternoon, on a typical three mile run through the park, Lisa misjudged the trail and landed awkwardly on a slippery rock. She hyperextended her right foot and heard something go pop. The pain was excruciating. Her doctor prescribed Vicodin for the throbbing in her foot. Lisa had never experienced inactivity before and it really annoyed her.

She started to focus on the pain and nothing else. Lisa found she couldn’t wait for the next pill.

She quickly fell into the habit of taking more Vicodin than recommended. Before long, she was seeing multiple doctors for pain management and doubling up on her prescriptions and spiraling into addiction.

Millions Of Stories Of Addiction

Like Carol and Lisa, there are countless stories of mothers who have slipped into addiction and are afraid they’ll lose it all if they share their problem with a loved one. The reality is addiction can happen to anyone, and the first step in recovery is asking for help. If you or someone you love is struggling with alcoholism or drug addiction, don’t wait another day. Call Summit Estate now to speak with an addiction specialist.

Read About Addiction In Silicon Valley